Kristen Cowan's Guide for Submission of Songs to Radio

First, thank you so very much for listening to, and accepting the song “Gulf Coast Breeze” by artist Paul Shiver. We are extremely honored to become a part of the SDC RadioWorks family. Thank you again!

It was such a pleasure to receive your words of acceptance through MusicSUBMIT, and we wanted to let you know a few additional things about Paul Shiver which may be of some help to you:

Finally, Gulf Coast Breeze is the first of several releases to come. We will keep you posted.

Please let me know if there is anything else you might need from us. And, once again, thank you so much for sharing the song – Gulf Coast Breeze, and, new artist – Paul Shiver with your listeners.

Posted by Kenneth Howard Smith at 5:30 AM No comments: 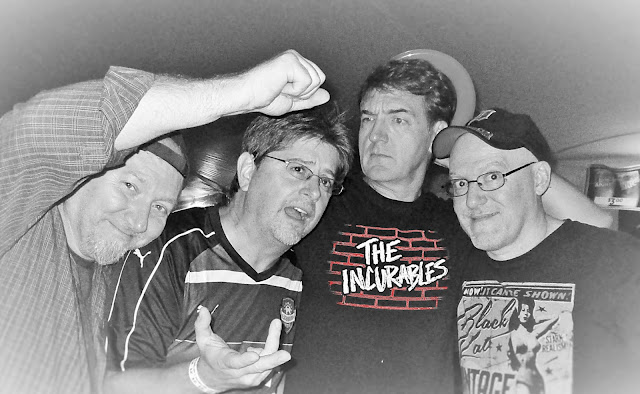 “Far Away” begins with a blast of chugging punk energy…“Your face is like a dream, whenever I close my eyes it makes me scream…” The next line, “I love you more than I can say,” is met with a Fab-Fourish response vocal of “I don’t know why, I don’t know why”…you get this immediate flash of Paul and George sharing a mic for the “OOOOOO” in “She Loves You”…There are little accent blasts along the way, such as the 1:10 mark where Pat unleashes a split-second surf guitar-via-Johnny Ramone lick…blink and you miss it, but you don’t wanna miss it. The song has a fantastic, phased bridge…“Why…are you…still here,” with the punk energy swelling and stopping on a dime before the guitar solo, angular and biting, a secret formula of Bob Quine / Tom Verlaine / Richard Lloyd meets surf meets George Harrison and Ron Asheton, before careening into the “I love you more when you’re gone, gone, gone, far away” finale, and the song has a fake ending, winding down, and most appropriately, ending on a single bass note from Ray…all of that in a taut and tasty three minutes and 28 seconds.

“Soda Pop” is a song whose framework and lyrics exist primarily for the band to romp (think Neil Young & Crazy Horse on “T-Bone,” which consisted of “Got mashed potatoes, ain’t got no t-bone..”). Ray kicks off the track with a vaguely James Bond-ish lick, joined by Darrin’s drums and then short, staccato bursts from Pat’s guitar. and more Quine/Verlaine/Lloyd slithery, Middle-Eastern, dissonant licks. “You say soda, we say pop, just depends on where you’ve been…” And then there’s the tip-off, the lyric that lets you know beyond the shadow of a doubt that you are on The Incurables’ home turf…“It comes in a bottle, it comes in a can, it’s made for a woman, it’s made for a man…” YEAH! WHOOO! “FREE BIRD!” Because the power of this band is that they can turn any song they damn well please into their own anthem, their own “Free Bird.” Pump your fist in the air and bang your head along with them, you ARE the party, the band is there to light your fuse, and they do it in spades on this track. “It’s always best, when it’s cold, but don’t shake it up, it might explode…” You know, at this point, I’m thinking there’s a 50-50 chance that this song isn’t literally about “soda pop,” but WHO CARES? It’s The Cretin Hop all over again, such a good time for all that asking “what” and “why” only amounts to a massive buzzkill. Just let it go and have the time of your life. And if that’s not enough, there’s another brilliant solo from Pat, all Stooges “No Fun” energy to spare.

This single bodes well for the future of the band, as well as a fruitful, ongoing relationship with Big Stir. Their home may be Detroit, but they are equally at home in Burbank with the Big Stir family of artists. This one was worth waiting for, folks. Grab a copy today.

FROM MIKE DEANGELIS of THERE ONCE WAS A NOTE

Posted by Kenneth Howard Smith at 9:45 AM No comments:

Greetings SDC RADIOWORKS,Emily Barker just released Return Me, check it out here.Here’s what they say about it:“Hello!I hope you enjoy this new song - it's yet another one where I've found myself contemplating the meaning of "home".Today is also one of Bandcamp's "fee waiving" days, so a good time (for me!) for you to pick up any other releases you might not have yet - I'll be adding some newly found stock of some older releases too - Dear River, The Toerag Sessions and A Window To Other Ways - just in case you want to hold off placing any orders until those appear!I hope you are safe and well in these strange times and that a little new music helps ease any worries.Emily x”

Posted by Kenneth Howard Smith at 11:24 AM No comments:

Posted by Kenneth Howard Smith at 11:23 AM No comments: